Enjoy one of your favorite posts from the past until I return to entertain you!

And thank you for your loyal following. 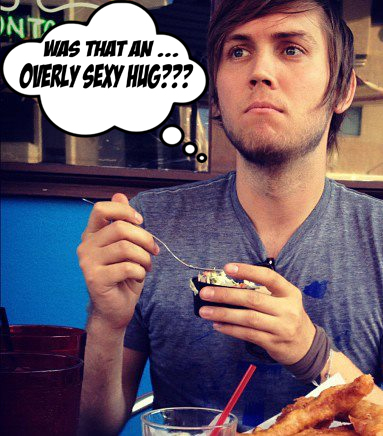 Well it was bound to happen.

Sooner or later I knew that I would cause some type of confusion in a young man’s life.

And so it goes…

Corey Hale: former student, friend and band mate of my 23-year-old son, amp wizard, and all around good kid.

I had forgotten about the “overly sexy”  hug that had sent him reeling for many months but last night as we all sat around at Sam’s Seafood, enjoying Kallie’s 23rd birthday party, the story came out.

I had just been lamenting the fact to my boyfriend, Stephen, and my dear friend Margie, that I was “dry” and didn’t have a Saturday story to tell, when Corey popped up, plied with cheap beer and a shot of Wild Turkey, his new girlfriend in tow, and said, “Mrs. Wood, do you remember when you gave me that overly sexy hug and then got really angry with me because I told Dylan about it?”

Stephen’s eyes widened… so did Margie’s before she said,  “Well there you go. Your Saturday story. See how the Universe aligns?”

I turned around and looked at him.

He was clutching his girlfriend’s hand tightly, she was a tiny little sweet thing and I could only imagine what she was thinking: I was the spitting image of Joan from Mad Men last night. A brick shit house in a tight white wiggle dress… dark red lips… high peep toe pumps.

I had become Mrs. Robinson and hadn’t even realized it.

I wasn’t sure where his story was going to go… but…. I am always willing to call myself out publicly and so… I joined in and hoped he would continue.

“I wasn’t angry at you.” I said.  “Just surprised you were such a kiss and tell!”

“I was confused!” he shouted. “Dylan and I were just about to go on stage. We were loading in out front of Di Piazza’s. You had just finished playing. I was in awe of you and it was like my first show ever and then you gave me the overly sexy hug.”

Stephen smiled at him, “Do you remember any of your set that night?”

Here he paused and looked to his girlfriend for assistance: She was no help.

“I don’t know what you’re complaining about,” she said. “Mrs. Wood is hot.”

This only made things worse.

I felt my shoulders tighten and I couldn’t bring myself to look at Stephen or Margie.

You could see his shiny little face… embarrassed, as if admitting in a confessional, that he had “feelings” for his friend’s mother: inappropriate feelings.

It was hard not to chide him and really fuck him up for life but I was reeling now myself and so… I sat quiet.

He reached up and wiped the sweat from his brow.

“Corey,” Stephen asked. “Can you show us the overly sexy hug?”

Corey put down his drink.

Excited to replay the moment.

He had his girlfriend stand up on a step so that she could portray his height accurately while he would play me.

He grabbed her roughly, took both hands and pulled her hips in towards his until they were both touching. Then, he kicked up one of his heels in a cutesy position and arched his back and pretended to press his make-believe giant boobs forward.

Oh my God… I thought to myself. Jesus…. I’m surprised he hadn’t passed out on the street when it happened.”

Stephen was really enjoying the moment: I of course was squirming.

I wiped my own sweaty brow and pretended to examine my fingernails.

I took a long sip off of my Coke and rolled my eyes at Stephen.

“RIGHT?” Corey said directly to him. Happy to have a champion on his side.

At this time Corey’s girlfriend left to get a soda and I turned to face Corey head on.

“Corey,” I asked feeling defensive for my behavior. “Are you saying that my hug confused you all of this time? That it was a negative experience for you?”

He looked at me stunned.

“Are you kidding? No way. I was confused in a good way for months.” He looked at Stephen and then added, “Months and months” a big happy smile plastered across his baby face.

I felt my own face flush.

Stephen nodded his head, lifting his beer toward me, in a silent toast to my brazen behavior.

Happy in the knowledge that I was Corey’s Mrs. Malone: Stephen’s hot high school teacher who he was still crushing on after all of these years. She was probably close to seventy by now but to Stephen, she would always be thirty-five, in a tight black pencil skirt, white silk blouse, small sprinkle of light freckles across the bridge of her nose, and a large luscious mouth.

“It was great,” Corey said. Before he bounced off to find his girlfriend.

Stephen leaned in close to me and whispered, “Mrs. Robinson. You’re trying to seduce me now aren’t you?”

“Oh shut the fuck up Stephen,” I snapped.

He giggled like a school boy as I watched Corey wave and smile at me from the bar… to be forever happily confused over the overly sexy hug.

While I considered the possibility of a breast reduction and a life time of wearing, no make-up, my hair pulled back in a small tight bun, a moo-moo and some nice orthopedic shoes.