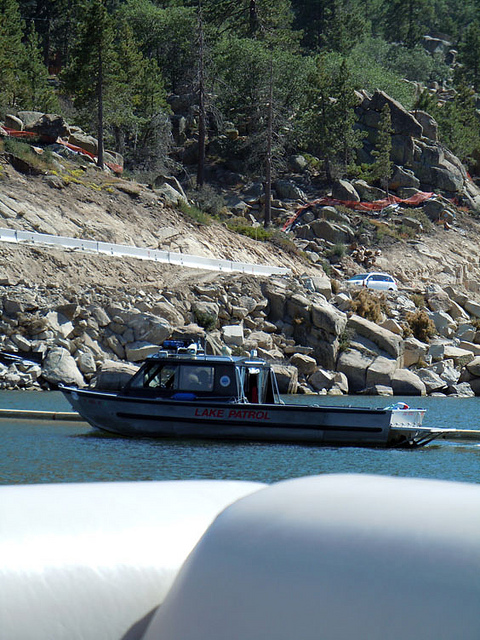 Charlotte was nine-years-old when I lied to the Lake Patrol.

Dylan and Lily weren’t much older… a few years… but still quite young.

It was our first summer, with all of us together in Big Bear, and I thought it would be fun to rent jet skis.

Everyone in the group had been swimming since they could walk and since I, unlike my brothers, preferred jet skis and water skiing to surfing… I thought it would be fun to show the kids what I could really do.

Was I showing off?

Isn’t that what water sports are all about?

I can do things with a jet ski that moms aren’t supposed to do.

Moms are supposed to stay close to the kids.

Moms are not to see how deep they can submerge the tail while they spin a tight 360 and then pop the jet ski out of the water with a child on the back of it.

Moms are not supposed to know how to reach under the cover and reset the switch so that the rental jet ski can now do exactly what it is supposed to do: HAUL ASS… but this mom… well, that’s a different story.

I knew that Lily really hated the lake water: she did not want to get wet.

She did however want to ride on the back of the jet ski with Dylan, who she adored at the time, and so poor Charlotte, having no idea yet how crazy I was after only being connected to our family for about six months, was stuck with me.

I putted out to the buoy, looking like the perfect PTA mom, waiting for the children, waving at the lifeguards, riding close to Dylan and Lily, pretending to enjoy the leisurely pace, until I had enough distance from the rental office to open it up.

Dylan was smiling… happy to have his own jet ski to ride. Lily was smiling, happy to be snuggled up to Dylan… and Charlotte had her little fingers wrapped in the belt of my vest… not really worried about anything.

I waited until Dylan pulled along side of me before turning and telling Charlotte to hold on. Now, Dylan didn’t hear me say “Hold on” but he saw my face when I turned back to crank the throttle and he knew (having lived with me since birth) he was in for it.

I gunned the jet ski and shot off across the glass with just one smug look back at Dylan who was trying his best to catch up. I waited until he and Lily were dead center in the lake before I spun a large circle around them and headed back towards them… ready to play chicken before I stopped about twenty feet from where they now were, cranked the handle hard, and watched as a good seven foot high wall of water flattened them.

They didn’t have a chance.

They were tipped over and in the lake in a matter of seconds.

I wasn’t really sure what Charlotte was up to. I could feel her hands now clawed into the armpits of my vest. I’m pretty sure she was screaming bloody murder as we roared up to Dylan and Lily, positive that we were going to kill them, but she hung on through it all and I was quite impressed that the child who once used to stare out the window at me, afraid that I would walk too far away from the house and strangers would somehow jump out of the bush and snatch her while I was somewhere near the garbage cans for five fucking seconds, was actually a bit ballsier than I had given her credit for.

I waited until Dylan and Lily got back on their ski before I took Charlotte for a few more passes at them, hitting them hard again and again with walls of water, before I raced off to freak Charlotte out with some 360’s.

This is when the Lake Patrol came on the scene.

I turned to Charlotte and said, “Whatever you do… don’t speak.”

I doubt she would have… by this time her lips were blue from the cold wind and the cold water, and her face was pale white, ghost like in the terror and realization that she really had picked the wrong jet ski to ride. I saw her glance back towards the dock. I’m sure she was thinking if she just jumped off now and made a swim for it, she wouldn’t go to the Big Bear Lake Patrol jail wherever the hell that was.

“What the hell do you think you’re doing?” The Lake Patrol officer asked.

“We have rules on this lake missy and you just broke every single one of them.”

“I did?” I asked and I used this opportunity to practice my “totally innocent”‘ face which isn’t one that comes easily to me.

“Speed limit, reckless driving, those tricks aren’t allowed in California,” He stopped here and removed his aviator shades and leaned over the edge of the boat. “Did you know that?”

I actually did know that, but the good thing about being a mom, is that most people would believe, as I said earlier, that a mom would NEVER break the rules intentionally.

“Really?” I said. “Officer, I’m so sorry. This is the first time I’ve ever been on a jet ski. I just rented it over there.” I stopped and pointed to the far dock.

He made a face, “Those tricks you were doing were tricks only experienced riders can do.”

I looked at him and blushed. “Really?” I smiled, and pretended to act shocked at my “natural” ability. “I just watched a how-to video on TV about an hour ago and thought I would see if I could try it.”

This was the moment where he could have written me a ticket.

This is the moment where he could have taken me in.

This was the moment where he had to decide if I was a true mom: responsible, honest, mini-van driving, church on Sunday, bake sale cooking woman or…

a she devil… a harpy from the lake… a sea nymph waiting to lure him down.

“No more,” he said to me as he pointed his bony, weathered finger my way. “I’m going to be watching you.”

I smiled and nodded before I putted off towards the dock.

“You lied,” Charlotte whispered from the back of the jet ski. “And you’re a teacher,” she said as if God himself was about to come down and smite me.

So I lied again.

“You didn’t want to go to jail did you?” I asked. “You know, they take everyone on the jet ski… not just the driver.”

I could tell she didn’t know what was worse… hearing a mom and a teacher, a double pillar of the community, lie so blatantly to an Officer of the Law or… believe that she could go to jail at the age of nine.

Either way… in the end I left without a ticket, Dylan and Lily had a good story to tell, and Charlotte learned to never ride on a jet ski with me again.