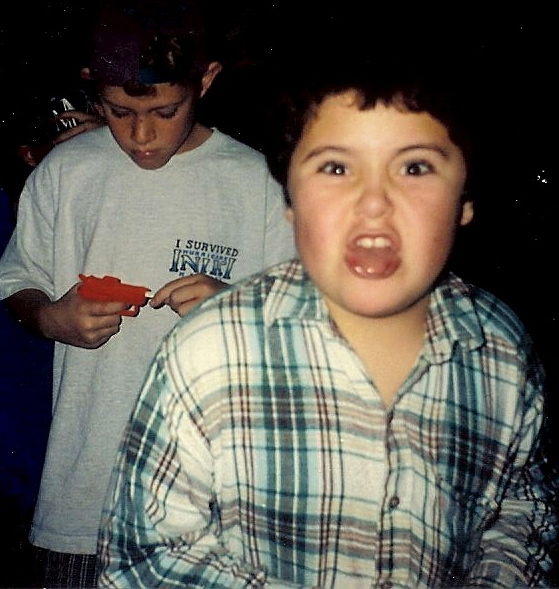 When Dylan was in 6th grade, he could quite often be a little shit.

Not that he can’t be a little shit now at 22, but middle school always tends to bring the “beast” out in children.

I don’t even remember what he was doing the day that I finally snapped.

But whatever it was… it sent me over the edge.

He made just one too many snide remarks…

Or farted too close to where I was sitting, one too many times before he laughed and ran away…

Or begged and screeched to go to the internet cafe and play Counter Strike for like… ten hours straight… when he hadn’t even completed his English project but, whatever it was… I had HAD it.

I turned and looked at his pudgy little pre-adolescent face and said, “You know what? I should have Baby Farmed you.”

He stopped… confused… and then… immediate silence followed.

“Baby farming,” I said knowingly. “Go look it up.” I gave him a  sinister glance as I walked quietly from the room and disappeared.

One of the best things about knowing random facts of obscure information is using it against others and yes… I am not above using information to mess with my own children.

In fact, I think it is imperative to give them something to think about… a way of humbling them if necessary and reminding them that education truly is power and that I can, and will break you with it if necessary.

Ten minutes later Dylan found me out in the front yard working on the garden.

I had totally forgotten our previous conversation by then, happy to be alone and away from my obstinate young son, soothed in my small task of arranging my numerous brightly colored gnomes strategically throughout my garden.

Dylan walked up to me and stood by my side. “That was the meanest thing you ever said to me,” he whispered.

I looked up from my work and said, “Huh?”

“Baby farming,” he said. His pudgy little face now crumpled into a sad frown. “I can’t believe you used that against me.”

“How long did it take you to find out what it was?” I asked.

“Five minutes on the computer.”

He paused… pleased that I had admired his ability to glean information so quickly… but unable to forgive me yet… or give in.

“It was still the meanest thing you ever said to me,” he mumbled.

He made a face, sure that he could not win this argument but unwilling to let it go, “I could swim when I was one you know,” he shouted before he stomped off, to God knows where, to create soda bottle bombs, Pokemon drawings, and ponder a world where Baby Farming was once a norm, leaving me to smile at the joy my offspring brought to me each time he chose to challenge his mother’s authority.