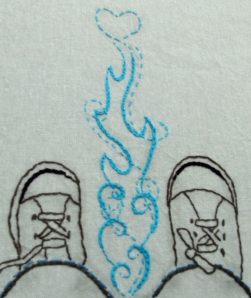 After Eddie Avalos mortified me with the “hand farting incident” I spent the next several days thinking about what I had witnessed in my front yard:

He fell down on the grass, put his legs up in the air, grabbed a lighter from his pocket, and I watched in utter amazement, as he cut a huge fart, flicked the lighter and suddenly shot a huge blue flame out of his ass. Then he laughed like a maniac and got up and ran away. It took me a moment to register what had happened. I was laughing so hard I could barely breathe.

I really couldn’t stop thinking about the whole scientific dynamic of the situation and wondered… how many people knew about this and how many people actually participated in it?

I knew I was REALLY behind the times with the “blue dart” when my friend Christy, who would never be as crude as me even on her worst day, said to me, “Lighting farts on fire? Oh yeah… people were doing that all the time at the YMCA camp when I worked there.”

“You know when you lit your butt on fire the other day?” I asked as we lay on the bed one afternoon… doing the usual… watching cartoons.

“Yeah,” Eddie said, not really paying attention enthralled with something on the TV that was much more interesting then our conversation.

He looked at me suspiciously.

I pretended to pick my fingernail and act bored.

“You have to wear Levi’s,” he said as he wiggled his little sock covered toes and patted his jeans. “Otherwise you’ll burn all the hair off your ass.”

I made a face.

“Eeeeew” I said as I slapped him and went back to watching TV.

A few days later, my friend Margie and her daughter Lily were over at the house.

I told them both about the whole fart incident and then I said, “I want to try a blue dart.”

“Do it,” she said and then giggled.

I was wearing jean overalls that day and so I figured that would be okay.

I dug around in a drawer and found a book of matches.

“You think it will work with matches?” I asked.

Margie and Lily both shrugged their shoulders… they were blue dart virgins just like me… we didn’t know what the hell to do.

I climbed up on the bed and tried to put my legs up like Eddie.

I stayed in position for what seemed like forever but I couldn’t make anything happen.

I felt sweaty and confused.

The pressure to perform was getting to me.

Lily was watching me like I was the Finale at the BEST circus sideshow in the world… and Margie was looking on with quite anticipation mixed with skepticism … not sure if I had the skill to pull this off.

Finally, I felt something going on and I tried to light a match and put it next to my jeans but as soon as my hand got close… I shook the match out and put my legs down.

“Do it!” Margie shouted… it was like I had my own personal blue dart cheerleader and I knew I couldn’t let her down.

I mustered my courage and threw my legs back up in the air.

I lit a match, pushed hard and a GIANT fart shot out of my ass.

I put the match directly onto the gas blast and watched as a HUGE blue flame exploded skyward and seemed to brighten the room.

I was amazed by the sheer magnitude of the size of it.

I was just about to start laughing when I felt my butt get really hot… scary hot… my face changed from one of total amusement to complete horror.

I was so afraid that I was going to catch on fire or explode from the inside, that I actually panicked and pee’d all over myself believing I was putting out the flame.

I rolled off the bed and ran to the bathroom, a large wet circle showing prominently on my crotch, crying as Lily and Margie laughed hysterically at my idiocy.

I slammed the bathroom door and sat on the toilet, my hands covering my face… laughing… as I listened to Lily and Margie giggling and going over the play by plays on the stellar entertainment I had just provided for them… quite pleased with the show.

I don’t think I ever told Eddie about this incident… but of course if he’s reading this… which I’m sure he is… he now knows.

I have never tried a blue dart since… I doubt I ever will again… but the sheer joy of doing something so taboo… breaking the “girl code” this time, by choice… left me feeling giddy with my accomplishment.