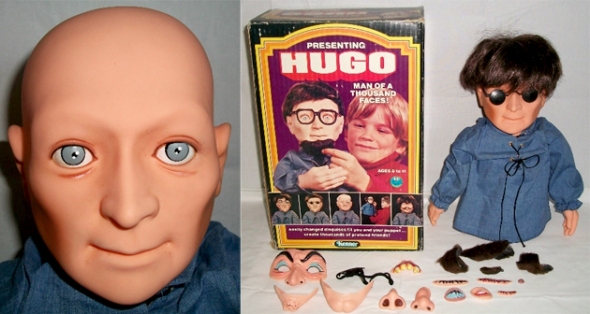 Just recently one of my good friends procured a doll that I had coveted since elementary school: Hugo, Man of a Thousand Faces.

You should of seen my expression when he told me about finding Hugo in almost mint condition… that most of his pieces were included (even his sideburns!)… and yes… he had received him in the original packaging.

I tell you… my face must have shown the pain and longing I felt for my first love… the shame and humiliation I had endured… knowing that I one day carelessly tossed him aside, left him to fend on his own, while I headed off to a joyous time at summer camp, not knowing that my mother would seize the opportunity of my absence, root through my room, and quickly hand Hugo and other misfit toys over to the Goodwill.

I looked at my friend’s new Hugo doll and suddenly, I felt an irrational anger. Just like a child unwilling to share, I wanted to snatch that Hugo box from out of his hands and make a mad dash to my car where I could sit and play with him free from interruption.

But just as I was about to throw a tantrum and exclaim that Hugo should really be mine, my friend said, his voice sweet as he held the box gingerly in his large manly hands and looked lovingly at the photos and description, “I always wanted a Hugo. But no one ever got him for me.”

And I felt my heart give… I wanted to steel myself to the moment but I couldn’t… my envy turned into understanding: I knew what it felt like to pray for Hugo and believe you weren’t going to get him.

I couldn’t begrudge him this gift. I smiled and expressed my happiness at his find, while my thoughts turned back to my own childhood.

My world had consisted of a multitude of Barbies and G.I Joes.

I had every doll that you could imagine.

I had dream houses and Barbie jets.

G.I Joe tanks and an arsenal of weapons.

I had elaborate stories for each one of my dolls; most of them hinging on the fact that we were in the midst of the Vietnam war during 1975 and my Barbies were always waiting, hoping, praying that my G.I Joe dolls would return safely from war.

I had just come back inside after making my large and very scary clown doll, attack my entire Barbie village while the G.I Joes tried to contain the situation to a “20 mile radius,” when I heard an announcer’s voice from our old Zenith console TV shout: HUGO CAN BE ANYTHING AND HE’S A HAND PUPPET TOO!

Something about his voice seemed “urgent.”

As if I was about to miss out on the deal of a life time.

I ran to the living room and watched as a boy, about the same age as me, used Hugo’s numerous disguises to create “thousands of pretend fiends.”

I knew immediately: I had to have him.

I screamed for my mother who took one look at the TV and said, “That is the most hideously ugly doll I have every seen. I’m not buying you that” and headed back to the kitchen to finish making our tuna, toast and gravy for our Saturday dinner.

I was barely deterred.

I knew how to lobby for a toy.

I would make a campaign to win my Hugo.

I started by leaving my Richie Rich and Little Archie comic books laying around the house, because I found that they always had an ad for Hugo, on the back page.

Each time the commercial came on the TV I would mimic the announcer’s voice loudly and draw attention to the screen.

I wrote my Christmas list early and HUGO was the only item on it.

And when I was afraid that even that might fail, I prayed out loud each night that Jesus would not only protect me while I slept but also bring me Hugo… just Hugo… and with him… I could save the world!

By the time Christmas morning arrived I could barely contain myself.

I was up by 3am, begging at my parents’ bedside, to open presents early.

I’m surprised they didn’t get out of bed and spank me senseless with the orange Hot Wheel track… their weapon of choice… but they didn’t. They told me I could grab my Christmas stocking, open it in my room, and not to come back to wake them again until it was a more reasonable hour like 5am.

I sat on the floor of my room and looked at the pathetic offering in my stocking: a candy cane, an orange, a bag of jacks, a box of crayons and a coloring book.

Nothing was enough without Hugo.

The hours until 5am were some of the most painful of my young life… each second an eternity… as I lay on my stomach, ate my orange, and colored.

When my kitty cat clock finally hit the magic hour of FIVE OH OH… I ran down the stairs at a furious pace… rushed past the Christmas tree to scream for my brothers who slept in the downstairs rooms off the back hallway, and then did a quick reverse and ran back to our tree.

I looked at all of the unwrapped gifts Santa had brought to us: Schwinn banana seat bicycles, Malibu Barbie, the game of Sorry, but no Hugo in sight.

I tried to look happy.

I tried not to behave as a spoiled brat.

But I would have traded everything under that tree for my Hugo: EVERYTHING.

An hour passed by with each of us taking turns opening gifts while my mother and father sat in the recliner chairs, sipping their coffee, and trying to keep some semblance of order in the present opening rotation.

And soon… all of the presents were open…

All of the wrapping paper was being burned brilliantly, by my brothers, in our fireplace… while I sat in the corner by the stairs, pretending to play with my Malibu Barbie, my head down, big warm tears rolling down my cheeks.

I thought I was doing a pretty good job of being quiet and hiding my pain but I guess I should have known that I couldn’t hide my emotions from my parents.

My father came over and stood beside me, his COOL menthol cigarette in one hand, coffee cup in the other.

“What’s a matter with you?” he barked.

I shook my head… afraid to speak… afraid that I would sob and look like an idiot that didn’t appreciate what was given to me.

My mom shouted from the kitchen, “I think you have another present behind the tree.”

And for a brief moment… my hope returned.

I dropped Malibu Barbie and crawled across the floor, slid under the pine branches of our tree, and reached to the far back corner where I found a box that looked… unfortunately… like a shoebox.

I pressed my back against the wood paneling of our wall and sat… unwilling to come out and open yet another disappointment… a new pair of Ked’s or worse yet… Wallabees.

I crawled from behind the tree and sat with the box in my hands.

I said a silent prayer… a final prayer for Hugo.

I reached up and slowly began to rip the Santa paper off the box.

Through a small hole in the top I saw a large “H” and suddenly the rest of the moment escapes me.

I think I actually lost my mind.

MY MAN OF A THOUSAND FACES!

I squealed with delight and rushed up the stairs to open the box in private.

It was even better than I imagined.

I opened the instruction manual and began to count off the itemized list of disguises:

I spent the entire morning making Hugo into numerous fiends while my brothers sat next to me, eating crispy bacon, mesmerized by my immediate “mastery” of disguises.

Hugo became the villain and the hero in each and everyone of my stories.

He sat proudly on my desk, his mysterious smile, holding all of my childhood secrets that I had quietly whispered to him in moments of play.

Yes… Hugo was my best friend and confidant until that fated day my mother got her hands on him and finally got rid of the “hideously ugly” doll I had begged for.

I often wondered why she got him for me to begin with if she felt so strongly about him?

Maybe she had once wished for a toy that she had never received.

Or maybe it was my father’s doing.

But either way… Hugo was the best Christmas present of my entire childhood.