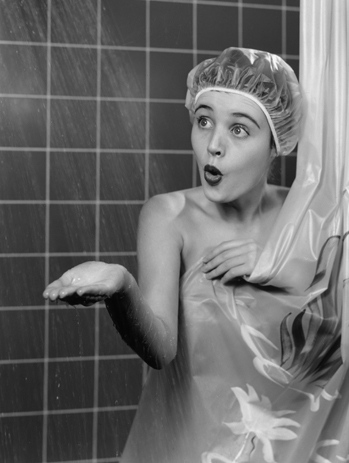 I have lived with my mother for many years.

First, out of necessity and later by choice.

Most of the time, we get along just fine but every once in awhile, like every parent-child relationship, we “get into it.”

Maybe it’s when I’m trying to leave for work in the morning and she decides that it is absolutely imperative to stop me in my tracks and tell me a story about when she… “Stepped on a small animal once and didn’t like it.”

Or…it could be when she asks me for the millionth time to show her which button to push to turn on the cable, so that she can BLAST Two and a Half Men re-runs for the entire day.

Or… Maybe it’s when I’m just about to nod off to sleep and I hear her cane thumping down our entrance walkway, my hall door creak open quietly, as she screeches at the top of her lungs,  “Are you awake? I said Deidre… ARE YOU AWAKE?”

No… I want to shout back… I’m just lying here pretending to be dead.

It is in these moments, that I must admit, that I feel like Danny DeVito’s character “Owen” in Throw Momma from the Train, and the fantasies of knocking the old woman down and rolling her out the front door are actually palpable.

But… I love her… and so… I deal with her quirks and foibles as I’m sure she must deal with mine.

But the day she tried to get me into the shower with her naked… was the day I knew she had really gone too far.

It was after her second knee surgery.

She hadn’t bathed in over a week and ripe, as only an old person can be, I suggested that it might be a good idea to wash up a bit.

“Well,” she countered. “I have been using these wet wipes they gave me at the hospital.” I watched as she picked the pack up and waved them at me… as if I couldn’t possibly see them lying on the table next to her.

She then threw them back down, disgusted with my lack of hospital hygiene knowledge, and became engrossed in a quick newsflash related to Charlie Sheen’s latest antics.

“That Charlie,” she shook her head at the television and looked back at me. “I don’t know what he thinks he’s doing going at it with those girls.”

I tried not to roll my eyes but it felt like they went on automatic pilot and circled my head for a good minute.

“Mom,” I said trying to direct her attention back to bathing. “Mom…” I said again a bit louder.

She sighed, exasperated by my interruptions, held up the TV remote, pressed the mute button repeatedly… confused each time the sound turned on and off… on and off.

“I just don’t get this remote,” she said. “Something must be wrong with it,” she pressed the button with a flamboyant finger flare one too many times and I snatched it from her hand and showed her, with a very exaggerated face and a snide tone, “One time, Mom.” I paused for emphasis after pressing the button. “See?” I said again. “One time.”

She ignored my demonstration and fed one of the chihuahuas the left over bits of her Breakfast Jack.

“Don’t feed them that Mom,” I pleaded. “It’s not good for them.” She grabbed another piece of egg sandwich off her plate, stared me down, smirked, and gave the dog another bite of food.

I felt my eye actually twitch.

The thought of hurling the chihuahua across the room and knocking my mom’s old, worn, blue recliner chair out from under her while shouting, “Look Old Woman! How do you feel about feeding that damn dog now?” Crossed my mind but I refrained from acting on impulse.

“You have to take a shower,” I said calmly.

“Fine,” she snapped as she snatched the remote from my hand, dropped it on the TV table, and slowly got up from her chair to walk to her room and get her things together.

“Can you at least help me?” She asked.

I went back into my office to type, and catch up on my writing, I didn’t hear my hall door open, or the cane thump down the wood floor towards the bathroom, or the shower water begin to run, until I heard, “READY!” from somewhere inside my bathroom.

Not sure if I had heard her correctly.

I got up from my computer and opened the office door.

“YES I’m in the BATHROOM!” She shouted over the blast of the water.

“What are you doing in my bathroom?” I asked through the closed door.

My shower had an eight inch step over ledge.

My shower had no elderly hand rails, or grip tape on the floor, only an old white porcelain soap dish attached to the wall that you could hang on to in case of emergency.

It would not be easier in my bathroom.

“Just come in and help me!”

Suddenly the horrible realization of what she meant by helping her with her shower became quite clear.

She didn’t want me to hand her a towel, or give her a robe or clean clothing discreetly from my side of the door, she wanted me there with her the entire time.

Oh God… I thought to myself. I hadn’t prepared for this.

I opened the door slowly and found my mom naked… a full frontal assault…  standing there… waiting for me.

I tried to divert my eyes anywhere away from her naked flesh but dealing with my present…. and confronted with what would be, one day, my inevitable future… I felt like I had suddenly stumbled into a chapter of Burroughs’ Naked Lunch or a deleted scene from Lynch’s, Blue Velvet.

I watched as she carefully climbed into the shower, and I steadied her by keeping my hand pressed gently to her back as she grabbed the soap dish on the wall and centered herself beneath the shower head.

“Oh that’s nice,” she said as she felt the warm water rinse over her and began to scrub up with the bar of soap.

I stood, my back pressed against the wall, listening to her wash and thought, Okay… it’s really not that bad. I think I can handle doing this every now and then if she needs me to.

I smiled to myself… feeling a bit altruistic actually, impressed with my ability to handle the situation so calmly.

And then…  I heard the bar of soap hit the tile floor.

“Deidre,” my mom said. “Can you come pick up this soap for me and wash my back?”

I felt like I was pinned to the wall.

Like some unknown force was holding me back and warning me not to go in there alone.

I steeled myself for the moment and like a good offensive player in football, who tries to recover the play after he fumbles the ball, I took a quick step, bent forward, grabbed the bar of soap from the floor, while trying to ignore my mother’s naked ass, and jumped up satisfied that I had completed my play and began scrubbing her back.

Everything was right in my world for exactly a second.

Then… I heard her say, “Oh this is ridiculous! Just take off your clothes and get in here with me. It will be so much easier if you just get naked and wash me down. I need help with my butt.”

I don’t really remember much after that, but I do know that I threw the soap towards the soap dish, threw my hands up into the air, and did some type of cha-cha back pedal out of the bathroom as I waved my hands back in forth in front of my ears, trying to erase the words I had just heard, while babbling something like, “LALALALALALALALALLA.”

I was out of the bathroom door faster than ever before in my life and I slammed that door behind me.

“What the hell are you doing?” She shouted after me.

“That’s it!” I screamed. “Get your ass washed and get the fuck out of that shower now!”

My mom didn’t say a word. I heard her humming softly to herself and knew that she had won this battle.

She dried herself with the towel I’d left hanging on the rod before asking me to go grab her robe that she had left hanging in her bedroom.

I walked across the house, mumbling angrily to myself, furious that I had been so stupid as to be the one to sign up to live with mom.

I stomped into the room that she had shared with my father for most of my life, and stopped… stared… at the many photographs and mementos she had placed about the room:

My baby teeth sitting in a small glass cup.

A photograph of me smiling, a tooth missing, red jump suit on, doll in one hand.

A card I had given her for Mother’s day last year… displayed prominently next to her bed.

A photograph of both of us together at my college graduation, her arm wrapped proudly around my shoulders and I felt overwhelmed by the passage of the years.

I grabbed her robe and quietly walked back down the hall.

“Mom?” I said suddenly humbled by my experience. “Are you okay?”

I handed her the robe through the crack in the open door.

But… that’s not what I said… and that’s not the way the world works… so being the good daughter that I am… I said, “I can’t believe you wanted me to wash your ass.”

She smiled as she picked up her cane, thumped the floor, and hobbled out past me.

“Well,” she said. “I always washed yours you little shit.”

I knew this dance.

It was our, I love you, and it would always be this way.

10 thoughts on “Nana Tries to Get Me in the Shower”