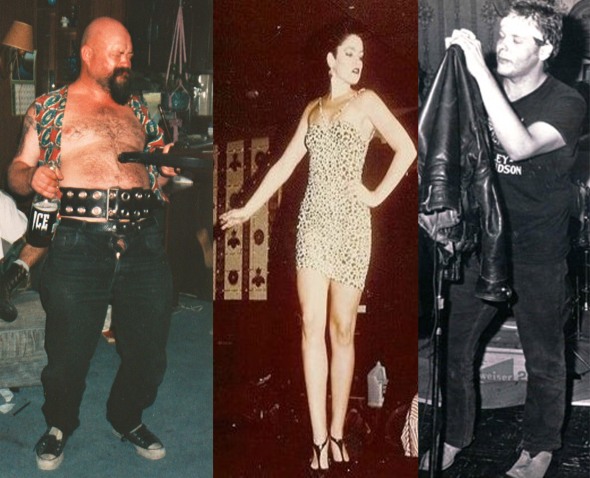 I was underage, barely 19, and sporting a fake I.D. the first time I went to Raji’s Night Club.

I was dating Joe Wood, who was already well-known as the lead singer of T.S.O.L. and I was new to the gig scene, just barely starting out with my own band: Gypsy Trash.

Joe was dead set on getting me to make the jump from gigs in Long Beach to L.A. but I was young, a bit unsure of the Los Angeles club scene, and really… a bit out of my element that night.

I had grown up under the watchful punk rock protection of legendary Long Beach and Orange County bands such as: Vicious Circle, T.S.O.L., The Adolescents, The Vandals and being baby sister to Jack Grisham, and then Joe Wood’s girlfriend, as well as a musician in my own right, I was used to being cocooned in even the most disgustingly seedy club environments throughout our “home” territory of L.B. and O.C. due to my connections to the notoriously violent boys of the scene but this… this was different.

It wasn’t that I was naive… I don’t think anyone in our punk rock crowd could have been considered naive… but the L.A. scene seemed harder, faster and I felt like a baby in their world.

I was withdrawn by the time we pulled into the back parking lot, trepidatious as we walked up to the Hastings Hotel, where Joe introduced me to Bernie the doorman, and down right disturbed as he lead me inside to the club.

The front of Raji’s was a thin dark corridor, smoky and dirty, with a long bar on one side, and there wasn’t a single familiar face for me to look to for comfort.

I felt like the perfect idiot 80’s girlfriend: scantily dressed, jet black cropped hair and large doll-like smile plastered across my face, as I waited for Joe to make the rounds of the room.

I didn’t want to seem like a downer or a drag so I tried to act cool. I think I even lit up a smoke, imagining at the time that it made me look mysterious and older, until Joe turned and pulled me close, kissed me hard on my forehead and whispered that he would be right back; he just wanted to find Dobbs, the promoter, and a bottle of Ten High.

He went off on his search, sure in the knowledge that his L.A. punk friends would keep me company until he got back but, being that I was an unknown outsider in their world, they all dissipated in a matter of seconds, moving off to the shady fringes of the room to snort coke, pop pills, chain smoke, or cop a grope while they waited for someone of notoriety and “interest” to walk their way and man… did they ever get it when El Duce and Top Jimmy came rolling out of the back room.

I knew both El Duce and Top Jimmy by reputation only and I swear when I saw those two together, stoned out of their minds, lumbering towards me, I actually felt my stomach drop and my hands turn cold.

I scanned the room for Joe, praying that he was close by but he was long gone.

I would have given anything to have my brother, Mike Roche, Ron Emory, any of my big Long Beach boys with me at that time.

I looked down at what I was wearing: a tight white and black animal print dress, braless, bare legs, high heels.

I actually ran my hands down my sides in a panic just to make sure I was actually wearing panties that night; something we often went without during the 80’s so that the lines of our super tight dresses didn’t ruin the lines of our ultra thin figures and I was fearful that a small piece of black cotton cloth with strings would be my only defense against these Punk Rock marauders.

I looked at the door wondering if I could get out before they saw me.

It wasn’t an option… I wouldn’t make it in time.

I felt that my best defense was to hide in the shadows and so I backed up slowly against the wall, trying to be low key, but I knew I stood out like a debutante in a biker bar.

Everyone else was in black: black leather jackets, black leather docs, black leather pants, black lipstick, black eyeshadow and here I was, the Punk Rock Princess, with my large green eyes, my fair white skin, deep purple lips, looking like one of the girls from a Nagel painting or a naughty Punk Rock Barbie doll that those boys couldn’t wait to pick-up and play with.

I side stepped and tried to hide myself in the dark corner but it was too late.

El Duce’s eyes locked on me; a brand new toy that he had never played with, and he stomped towards me, pants unzipped, sweaty large belly protruding from under his ripped black shirt, bald greasy head, glassed over eyes, God knows what drink in his hand, as he snatched me from my hiding spot like I was a rag doll.

He woolied me about and then held me tight until Top Jimmy, distracted by someone in the crowd, heard him calling to him to come across the room and meet his new baby trick.

Jimmy smiled: a big hill billy gap grin with numerous teeth missing from his mouth, and I thought to myself, Oh God… I’m about to be fucked by the punk rock men of Deliverance.

I looked back towards the door, hoping for help, but saw only Bernie who waved, gave me a big thumbs up and a happy nod, sure that I must like being woolied by two of the most notorious Punk Rock Legends of all time but I assure you… I did not.

El Duce and Top Jimmy had me pinned tight in that corner so fast that I was sure my initiation into the Los Angeles club scene was going to end with me being knocked up by El Duce: the most disgusting man I had ever met in the world or tag teamed by the both of them.

El Duce leaned in and laughed loudly in my face.

His eyes were crazy.

My mind reeled through the numerous stories I had heard about him: stories about El Duce and The Mentors sexual deviancy were legendary.

I felt like I was going to be sick.

I’d probably end up with crabs, syphilis, gonorrhea, herpes, just from him laying his dirty old fingers on my skin.

By this time, Top Jimmy was licking my neck and El Duce was up my skirt and trying to work off my underwear.

The amount of alcohol on their breath, and in the air around them was overwhelming.

I tell you… if I hadn’t been brought up with some of the hardest punks in L.B. and O.C. I probably would have fainted and woke up a victim of “big man” abuse.

Luckily… I kept my sense of humor, and my pretend calm demeanor, as I used my sass to keep El Duce’s hands from going “all the way” and Top Jimmy from covering my body with an enormous puddle of drool as I looked to reach for the nearest Budweiser bottle to clock those mother fucking clowns as soon as I could get a chance.

I felt my skirt being lifted higher.

I pushed El Duce’s face away as I turned to see what was going on with my skirt.

Top Jimmy was now pulling it up from his side and I knew if a miracle didn’t happen quick… I wouldn’t have much longer.

I scanned the room in a panic… praying someone would do something but everyone was completely oblivious to my plight or just accepted that when it came down to El Duce and Top Jimmy: You let them do what they liked.

I wanted to kill him.

I swear if I could have gotten a hand free from the lecherous grasp of El Duce, I would have clocked Joe with a Budweiser bottle first and then used the broken neck to ass torture El Duce in a night club.

Joe took one look at me being molested by the big men and rushed across the room and knocked El Duce away from me.

I will never forget the look on El Duce’s face: it was as if Joe had just pried raw red meat out of a wild bear’s mouth.

I thought El Duce was going to kill him.

But Top Jimmy loved Joe. He stepped in between Joe and El Duce, wrapping his arms around Joe, and soon… they both had El Duce calming down as Joe explained that I was his girl and that El Duce would have to move on to someone new.

I watched as El Duce clinked glasses with Joe, walked away, heading to the back room, but not before he turned around one more time, staring me down as if to say, Another time Princess, then pretended to jack himself off, flicking his tongue back in forth in a grotesquely sexually explicit gesture, as he disappeared.

Now that El Duce was away from me, I wanted to run back after him and slap his big fat greasy head as hard as I could but I was sure if I tried it, he would chase me all the way to the parking lot, all the way home for that matter, and make me sorry for doing it and so… I held my anger for another day.

Top Jimmy, was nothing more than a toadie. Without the likes of El Duce to egg him on he was soon happily entrenched at the bar with Joe, settled in for a long night of drinking, while Dobbs, who took an immediate fancy to me, babied me the entire night and made sure that I wasn’t left alone again.

I can’t say that it was an enjoyable experience, but it was of course, and infamous one… and a story worth telling.

It’s been thirty years since that night at Raji’s… Dobbs, El Duce, Top Jimmy all long gone now… and I’d like to think that Dobbs and Top Jimmy with his big goofy smile are somewhere off in a musical Heaven; Dobbs telling stories and Top Jimmy apologizing for his sins.

Off in some Punk Rock Purgatory on the outskirts of Hell: wrecking havoc and mayhem and I imagine… still loving it.

3 thoughts on “My Very First Visit to Raji’s Night Club: Or… How I Survived Being Woolied and Molested by El Duce and Top Jimmy: Two Very Drunk and Disorderly Punk Rock Legends”