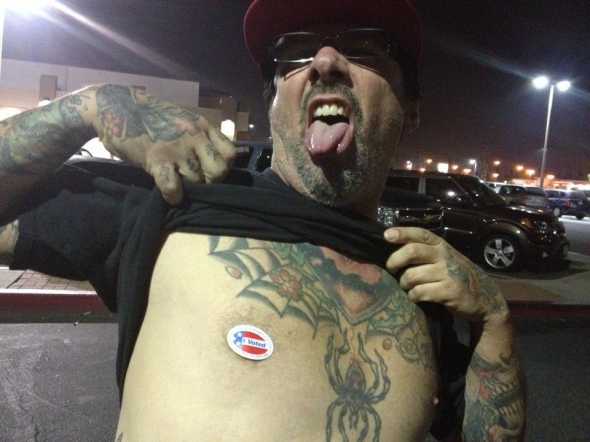 This is Paul Brashier.

Paul Brashier has been my friend since I was a very young child and he is one of a small, select group of people who can actually make me laugh so hard that I will eventually end up peeing my pants if I do not run away from him immediately.

It is a quality that I both love and hate in him.

Love? Because it really is fun to have friends that can make you laugh that hard.

You could be standing behind him, with a ball ping hammer in your hand, ready to knock his block off, and he would just turn around, make a face…strike an exaggerated pose… or inhale off of his asthma intake loudly before saying something like “Hey Tappy Tapperson and the Tappets… how about you take that fucking hammer and move along” and you’d be falling out again and unable to get in a good swing.

Paul moved away from my neighborhood for many years but now is back… with his lovely wife and family… and when I recently saw this photo of him on his Facebook wall… it reminded me of a minor moment from years earlier at the neighborhood Albertson’s.

In fact… it was the first time in my life that I have ever seen Paul Brashier totally embarrassed. So much so, that he couldn’t look me in the eye for several hours after the incident.

We were riding together in my mini-van with my good friend, Christy Godfrey. Christy is a teacher and has that look and attitude about her that seems very proper and very strict. However, once you get to know her, you find out that she is actually quite a lot of fun.

Paul did not know this yet about Christy, so as we all drove towards the Albertson’s: Christy riding shotgun, Paul in the back… he was, in his opinion, loosening her up with his comedy routine and doing a pretty good job of keeping us both from breathing during the entire short ride to the store.

He was really on a roll.

When we got there…. I wanted to stay in the car with Christy and chat and so… I handed Paul some money and asked him if he wouldn’t mind going into the store for me.

He pretended to fuss… to roll his eyes and make a scene… but then he cracked a joke, jumped out of the car, pretended to jab at me through the open window, before he walked in front of the mini-van, undid his pants, and mooned me.

Now, I knew immediately that it was just his way of  teasing me… a kind of “fuck you” for making him go into the Albertson’s on his own… and that he planned to show just a bit of crack before pulling up his pants and moving along.

Unfortunately for Paul… he lost his grip on his clothing… and I watched as Mr. Skinny Ass dropped his pants completely to the ground.

One minute… he was fully clothed in the Albertson’s parking lot and the next minute… he was buck-ass naked, free-balling it and pants-less in the middle of Middle Class America.

I watched as he panicked.

Even from behind I could tell.

His head did a triple-take in all directions.

He stopped… stunned… and stared at the large middle-aged woman who was now standing in front of him. She stopped… stunned… her shopping cart a shield against the punk rock pervert she was watching.  Her eyes grew large… her knuckles grew white as she clutched the handle of the basket… unsure if she should move forward to her car, which we soon found out was parked next to us, or make a run for the light of the supermarket door and the safety of the rent-a-cop who was napping on the bench next to the magazine rack.

Paul reached down as quickly as possible to pick up his pants… without thinking about the view Christy and I were privy to from behind. He bent over completely, balls dangling, ass cheeks spread wide, and winked his brown-eye in Christy’s face.

I heard her gasp…. Paul heard it too. I watched as he froze… the realization of what Christy had just seen… hitting him full force.

I couldn’t take any more: I threw my head back and howled with glee.

When I looked up again… Paul was scurrying towards the store, not sure what to do: too embarrassed to come back to the van and obviously afraid that the woman he had accidentally flashed was about to call the police and report him.

Luckily for Paul… he had nothing to worry about.

She walked up next to the van, saw that Christy’s window was open, turned to speak to Christy… giant smile on her face… and said, “God bless the youth of America.”

Christy sat quietly for a moment… head down… not sure what to think.

Having never been around a “Punk Rock” group in her life, until she had the unfortunate luck of running into me, she didn’t really know what to do.

“Should I say something when he gets back in the car?” She asked.

I was still in the throws of laughter but managed to get out the words, “If he even comes back to the car.”

It was a really long wait.

I could only imagine what was going through Paul’s mind. It must have been agonizing for him.

I knew Paul well… and though he can come off as quite wild from time-to-time he was raised to have some semblance of middle-class manners and I knew that he was really struggling with this moment.

Finally, we saw him come out of the store… baseball hat low over his eyes… Dickie’s jacket buttoned up to the neck… pants cinched tightly… head down… grocery bag swinging… as he made for a quick clip across the lot and hurriedly got back into the car.

Christy and I both lost all control.

I caught his face in the rear view mirror and watched as he looked out the window… first a bit angry and miffed but then… comforted by our laughter… a bit of a smirk returning to his face.

He was still too embarrassed to chime in… recap the events…. and that was alright by me.

FINALLY the person who for once did NOT get the last laugh.