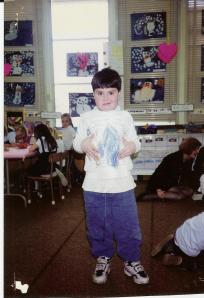 Dylan believes that Joe and I bordered on the edge of abusive while raising him.

Not physically… but mentally.

He seems to think games like “Goat Man” and “Sanctuary” and “Mean Mommy” and “I’m Blind” were meant to torment him, but we try to explain that they were just good fun or in some cases… meant to protect and educate.

Dylan was prone to taking off his clothes and running away when he was a baby so Joe, my X, invented “Goat Man” basically, “The Boogie Man” so that whenever Dylan ran away he could shout, “Goat Man! Goat Man!” and Dylan would scurry to the safety of the house. You don’t want your child running around the neighborhood naked. It may have been good fun back in the day, but now…. that’s a big no.

We didn’t think about the lasting effects of “Goat Man” … a monster that would now live forever in our child’s imagination. We just thought “Goat Man” would live until Dylan was old enough to understand that we created G.M. just to protect him. No… we were wrong. Dylan is now 22 years old and if I stood outside in the dark and yelled “Goat Man! Goat Man! Goat Man!” Dylan would still scream and scurry for the safety of the house afraid that a little hoof footed evil man was about to nab him in a matter of seconds.

“Mean Mommy” was one of my games and it was my way of letting Dylan know what was in store for him if he should so happen to cross the line and break Mommy’s rules. Any time he would do something terribly naughty, I would make crazy eyes at him, switch my voice into a high pitched tone and say, “Mean mommy” and Dylan would freak out and beg me to stop afraid that I had gone crazy and might kill him.

I was 26 when I invented this game, not much more of a baby myself… but I would still invent it again right now if it meant Dylan would turn into the great person that I believe him to be today.

So…. the day I invented “Sanctuary” I never thought anything would go terribly wrong…. I just thought it would be fun to beat Dylan with a yellow plastic stick ball bat while shouting “Sanctuary!” dragging my right leg behind me as I pretended to be the Hunchback of Notre Dame while Dylan scurried along the floor screaming “No Quasimodo! NO!”

We were half way through the living room, then rounding the corner of the hallway with Dylan crawling on his hands and knees, while I smacked his butt with the yellow plastic bat as he squealed  and giggled with delight and tried to escape me.

At that time, we still had carpet in our home but it was old and worn and in some of the door frames, sharp carpet nails had become exposed due to the many years of heavy foot traffic.

Dylan rounded a corner to hide in a bedroom when the top of his fat, soft, pink baby Fred Flintstone foot, caught on one of the large sharp rusty nails which ripped his foot wide open.

He flipped over, covered his foot in shock and terror, little arms shaking in pain and anger before he looked up at me and screamed, “LOOK WHAT YOU’VE DONE TO ME!”

His face was that of ultimate betrayal.

I thought he was being overly dramatic until he removed his hand and I saw the damage: exposed meat and a fat gaping mouth of a wound.

Joe had come running when he heard the commotion and after seeing the injury, and then giving me a look that could have frozen hell, placed a clean towel over Dylan’s foot, carried him to the car and we rushed him to the emergency room.

They took us straight in and in a matter of minutes, Dylan was sitting on a hospital bed as they took our information and a nurse went to get the doctor.

When the doctor arrived, he asked that Joe and I take a seat in the chairs against the wall and wait while he spoke to Dylan privately. I did not know that this was normal practice, that doctors often speak to children alone to check for child abuse. A police officer from child protective services was also called in to listen. I’m not sure if they just hang out at the hospital waiting for these types of cases or if they called him in specially.

I could see Dylan’s little rounded back… he was still sniffling as children do after a hard cry and his shoulders would pulse up and down every few moments as he tried to catch his breath.

The doctor pulled up a chair and sat down facing Dylan. Because of our location, we could view the doctor’s face, the officer’s face… but nothing of Dylan’s expression.

And Dylan replied in broken sobs, “My mom… was BEATING ME… with a Baaaaaattttt.”

You can’t even imagine the look on the doctor’s face… I don’t know if I can even describe it… he looked at me like I was the biggest moron in the world. I swear… it wasn’t a “You are obviously a child abuser” look it was a “How the hell did you come up with such a stupid game like Sanctuary Quasimodo you idiot?”

The child protective officer looked at Joe like he was the devil and I could feel shame radiate from Joe’s entire being before he looked at me and whispered, “We’re so going to jail.”

But we didn’t go to jail. We never went to jail for raising Dylan. They stitched up his foot and sent him home with the crazy woman and the devil after Dylan through broken sobs explained while having his foot stitched up that it was just a game… and that he loved his mom and dad very much.

I’m sure if Dylan is reading this now… he wishes he could go back in time and give us a taste of our own medicine. Maybe a game called, “Send Mommy and Daddy to Jail”