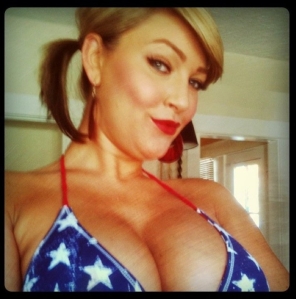 Last night Big L got in a bar fight.

I can’t even imagine what a bikini girl bar fight looks like but I’m sure it is quite entertaining or would be entertaining if one of the bikini brawlers were not my daughter.

I really don’t want Big L to work at the bar anymore. Doug seems to be banging the new girl and the new girl obviously feels threatened by Big L and if you could see Big L you would totally understand why.

I actually grew her inside of my magical uterus and shot her out of my vagina which still amazes me that a relatively short woman 5’7″ could actually shoot a 10 pound baby out of her vagina and watch this baby grow into a 6′ 1″ glamazon with a set of 36 D breasts and an ass that can still wear a size 4 in boy’s underoos.

It seems terribly unfair that I have to live with a 26-year-old that looks like she popped off the Victoria’s Secret runway but I love her, and she is mine, and I did create such a fantastic human being so, I must accept that I will stay short and fat and eventually ride around on a rascal in a moo moo eating a ho ho while Big L will continue to be tall and thin and glamorous until long after I am gone.

So, last night Big L comes downstairs and I can tell by her eyes that she had been drinking. They were glossy, not yet in the drunk category, but definitely catching a “shine.”

She is insistent that she did not start the brawl and yes, the new girl did elbow Big L in the face first, but I remind Big L that she in no way needed to retaliate by pulling all of her high school water polo skills out of her bag of tricks and dumping them onto this new girl’s face. If Big L had been in a pool during the fight, the ref would have rolled her the next three games for unnecessary roughness.

“Who stopped the fight?” I asked.

“Oh, a bunch of guys pulled me off her.”

“You’re kidding me?” (I know I should have had something more profound to say but I was obviously at a loss for words having been thrown into an Elmore Leonard novel without even knowing it.

This actually does surprise me. I always assumed if you worked at a bikini bar incidents like this led you to a whip cream wrestling ring or at least a very large tip take for the night but home? That was a shock.

“I don’t want you to work there anymore.” I said. “I think the drinking is a problem and obviously, the behavior.”

Big L doesn’t like my answer of course and stomps off to brood over a greek pizza and a bootleg copy of Julie and Julia.