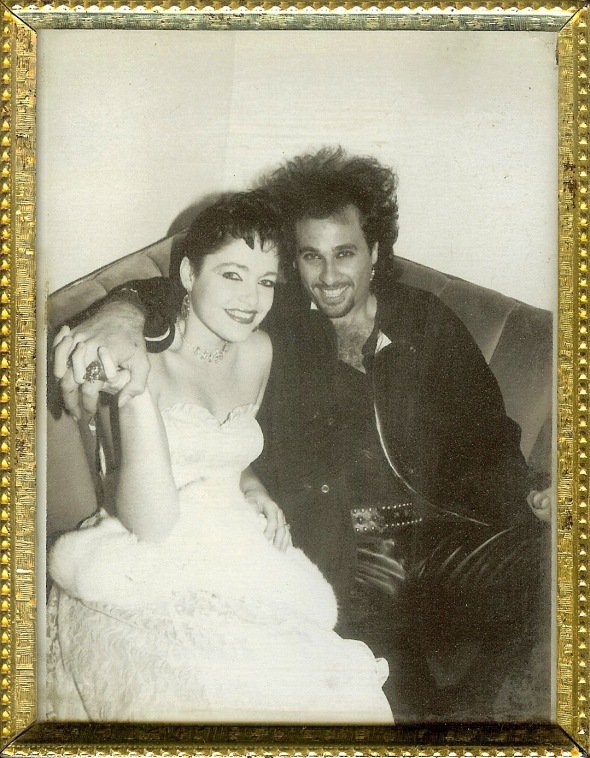 I was not perfect in my marriage.

(As this story will soon prove)

But often times… Joe is blamed for the complete demise of our relationship and I’d like to go on the record as saying: I was at fault too.

Those of you who knew Joe and I as a couple would probably remember us as: passionate… tempestuous… or the crueler of you… dysfunctional.

We definitely ran the gambit of emotions, from love to hate, and often fought our way through our relationship but, always found our way back to happiness through a mutual love of laughter. And so… Joe would tell jokes and act out vivid stories, after one of his many benders, when he hoped to melt my anger and get back in my good graces and I… would prank him with practical jokes: My only way of “getting even” with him without really… “getting even.”

By the time we had been together for several years Joe had already fallen victim to many a prank:

The time I told him if he put a hair clip on his nose it wouldn’t really hurt, demonstrating on my own nose, but not really clipping it tight, as I watched Joe mimic me, the claw like mechanism biting into his fleshy skin as he screamed in horror, cried out in pain, and tears ran down his distorted face.

Or the time I pretended I was an alien, just after he had finished watching Communion and Fire in the Sky, giggling with glee as I heard him claw in the darkness at the hall door, moaning in horror, as he tried to escape from the creature that he somehow imagined was behind him, horrifying in it’s unknown image, as he remained unable to unlock the door in the dark.

And Joe, though not always a “good sport” would always accept this form of comically cruel punishment as a consequence for his behavior.

He knew what he put me through.

Everyone knew what he put me through.

And so… this is how our story went.

Joe had been on quite a run: fresh off tour… cocky in away that comes from being fawned over on the road… and coming down from two months of excessive partying.

T.S.O.L. had been on Mtv when they hit New York and I had noted in the interview that Joe had chosen not to wear his wedding ring, later telling me that “It looked better for the band if he appeared single.”

But his big-headed attitude… his flippant reply… had stayed firmly stuck in my craw for weeks and I knew… if a situation arose at home where I could make him pay for this mistake that didn’t involve a bat, a knife, or a gun… I would.

I would in spades.

And one day… the moment came.

I was in the house when I noticed Joe standing out in the backyard.

He was having a smoke: Marlboro Gold dangling from his lips… old flannel shirt loose against his tall frame, ripped up jeans that were tattooed with a Sharpie, his black steel-toed Chippewa knee-high engineer boots kicking at the cement, his hair long and ratted… basically… a version of a biker devil hanging out by my pool.

I watched as he put his cigarette in his mouth and clamped it between his teeth, holding it steady to smoke, as he reached for the long-handled pool brush and began cleaning the deep end of the pool.

I knew then it was time… time to make him pay… and so… I opened the sliding glass door slowly… inch-by-inch…. making sure that no noise would betray my motives… as I finally slipped through the small opening of the door and tip-toed towards him.

The sun was my ally that day… my shadow unwilling to betray me… as I crept forward… barefoot… sly…. like a cat focused on prey… everything else fading away as my vision tunneled and my mark grew larger in my sights.

He didn’t have time to react.

He felt my hands slam hard against his back…

He heard my guttural scream of revenge… the power of a woman scorned echoing across the neighborhood… and was already mid-deep in ice cold pool water, on his way down to the bottom of the basin, before I even heard an “Oh fuck…” escape his lips.

I jumped with joy… a small girlish jump into the air as if I had just won a hopscotch contest or was pleased after a first date with a boy I really liked.

I turned away from the water and skipped towards the slider… dancing my way into the living room… big smile on my face… sated in my childish joy and waited for Joe to respond.

It was then that I registered something was wrong.

I turned and looked towards the pool; barely a ripple… no Joe.

I felt my right eyebrow arch and my lip curl.

Ah ha! I thought to myself, I know your game.

And so I stood facing the deep end with my arms firmly crossed upon my chest.

Sure he had turned the prank on me.

But several seconds passed by and Joe did not emerge from the pool.

I felt myself grow twitchy.

I could hold my ground but this just didn’t feel right.

I hated giving in… but I would have to concede defeat… so I rushed to the edge of the pool and looked to the bottom.

Joe was there alright.

Pinned down by the drain.

He looked like one of those inflatable air dancers you see in front of used car lots: arms waving wildly skyward… body bending in a snap happy rhythm from side-to-side. A living marionette screaming for me to pull the strings as giant bubbles of air rocketed up towards me to break quietly on the surface.

It was then I realized that I had miscalculated my prank terribly.

I had not taken the time to scientifically calculate: more mass… given distance… dexterity and drag.

JESUS, my brain shouted at me: He was wearing knee-high steel-toed motorcycle boots you IDIOT!

Boots that could each easily hold a 5-gallon container of pool water.

Boots that could weigh a man down as if he were an over-sized submerged paper-weight on a concrete desk.

My mind flashed to scenes from The Godfather, Goodfellas, and numerous other gangster genre clips before I fell to the ground and grabbed at the pool pole that now leaned against the edge of the deep-end and thrust it forward towards Joe, who had been unable to reach it; too far from his grasp.

He snatched for it and I saw his white knuckles press tightly against the silver metal. I watched as he used it for leverage… pulling his legs up out of his boots and breaking quickly to the surface where he gasped for breath and clawed his way to the edge.

His head resting on his arms, his lips blue, as he drew in great draughts of air and tried to regain his strength.

Though I hadn’t planned to drowned him… I thought in my moment of anger I would enjoy watching Joe be taken to “the edge” but it wasn’t how I imagined it at all… how it always played so “funny” in the movies.

I waited… my face close to his…. waited as I watched for his eyes to connect with mine and forgive me for my own unforgivable act… and soon… his breathing slowed… his head turned towards me and his eyes focused on mine.

“Yes?” I said, now touching his arm with tenderness… waiting for it…

“hate you…” he said as he climbed out of the pool and crawled towards the sliding door.

“Hate… you,” he repeated as he stripped naked in front of me, a furry Yeti, angry and wet making his way through the house.

“HATE YOU!” he screamed as he passed the kitchen and stomped through the back hall where he then doubled back to our second slider by the side of the house and pressed his naked ass against the glass… his only means of vindication… before a hot shower… would set things right.

I didn’t follow him… I let him have the last word and the last obscene gesture.

I sat on the porch steps and waited for the shower to stop… Joe to dress… and hoped with all my heart he’d come back out for another smoke.

I was still looking at the pool… the scene of my most recent crime, when I heard the side slider open and then felt Joe sit down beside me and light up a smoke.

“Fucker,” he said as he took in a deep hit and blew the smoke out up into the air before kissing the top of my head.

I said nothing… everything between us had already been said.

We loved each other… despite it all and so I nuzzled in next to him… my head down… overwhelmed by all of his wrongs, overcome by all of mine and promised that I would never prank Joe again.